This book contains 86 amazing card magic tricks that you can learn.

This eBook is available for downl oad for just $25 – that means that we're paying only $0.29 for one trick and that is amazing value for the money! 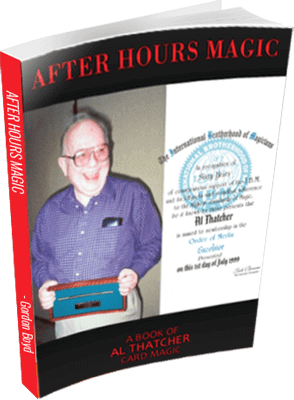 Who is Al Thatcher

Al Thatcher was born 28th November 1917 and he started to be interested in magic when he was 13 years old.
In March 1939 he joined the International Brotherhood of Magicians (IBM) and he was also president of Ring 7 Magic club in Columbus - he performed club style of magic with preference to card magic. He was considered to be "Card expert" at Ring 7.
He was close friend with another famous magician – Nick Trost – and many others. He was active in magic until he passed away in 2005.

This book is intended for intermediate and advanced magicians.
Beginner magicians can of course also benefit from this book but they will need to spend more time practicing card sleights needed in order to perform described card magic tricks.
The most difficult sleight we can find in this book is probably be an Overhand stock shuffle or the Elmsley Count.

After Hours Magic by Al Thatcher is great eBook – it contains 86 card tricks, mostly on intermediate level.
All tricks and sleights are described in great details so its easy to understand the presentation and explanation as well – Al does great job in teaching.
Because it is eBook, you'll receive your copy immediately after purchase to your e-mail address.
For just $25 this is great book to have and learn from!
If you're interested, you can find this book HERE.